Many people are curious about what it’s like to raise a kid with autism. One interesting result of this column is that many people are interested in what it’s like to raise Georgia. I realize that I focus here, often, on the part of raising Georgia that speaks to the challenges (and even sometimes the joys) of autism, but the focus is typically on that, rather than simply on Georgia, the person.

It’s not that I think of her autism as something quite separate from her, something that is just ‘a part’ of her or something that can be turned on or off. Rather, my ideas about her and autism are, to say the least, quite complicated and vary wildly with the situation, the day and very much the reactions of others in the world around us. I like to think of it using an analogy – for anyone who has agonized over a PowerPoint presentation, this will hopefully be clear. When I make a presentation, I often like to use more than one image on a slide, arranged not uniformly, in a patchwork-style, overlapping and building upon each other. Often, though, one image obscures a corner of another or overlaps and blocks an important feature on the image behind it. There’s this great feature in Powerpoint in which you can right-click to bring the image “to front” or place it behind another image. Essentially you decide what image you want on the top of the pile (clearly presiding over others) and what image you want to be behind the others, a bit obscured or with some elements blocked from view. This is how I think about Georgia and autism. Some days her autism seems to be ‘out front’ and commanding both energy and attention. Other days it’s ‘behind’ my image of her and I see Georgia, lighter somehow and unencumbered.

The many overlapping images of Georgia

But for today’s column, let me tell you a bit about Georgia the 15-year old and not Georgia the kid with autism. Two things are worth saying here. First, I don’t consider her autism as something inherently negative. She is who she is, and part of her charm and loveliness is her approach to the world and the way she moves through it. This is inevitably flavoured by her autism, directed by her developmental delay and from a practical perspective, driven by her physical limitations. So her ‘disabilities’ are something that truly make her who she is. Second, it’s tough to ‘take out the autism’ when I talk about Georgia – and that’s okay. But I have these moments when I realize, “Wow, she’s a pretty typical 15 year-old in some ways…” and thought I’d share a few of those here, along with the lessons I’ve learned (similar to what I assume many parents of 15 year olds learn) and a few insider tips.

1. She  rules the basement (aka “The Teen Zone”). Like Daenerys Targaryen, Mother of Dragons, she guards the hallowed entrance to the basement with a skillful eye, lightning reflexes and an instantly terrifying growl lest you dare to set foot on the top stair, heading downwards. You could be bearing a silver tray of the finest foods for her and she’d outright reject you, banishing you to the upper floors of the house. Lesson: don’t enter the Teen Zone unless the Mother of Dragons summons you.

Insider tip: She will share the basement for exactly 30 minutes with three non-negotiable conditions: (1) Jeopardy is on the television; (2) You come bearing a snack that includes cheese and excludes apples; (3) You massage her neck, back or shoulders with medium firm pressure at her behest.

2. She likes Top 20 music. As a late 40-something academic, I’m somewhere between foolishly proud and outright mortified that I know the lyrics to every song performed in the last three years by Pitbull, Bruno Mars, Katy Perry, Kesha (“previously stylized as “Ke$ha, but no longer”…bet you didn’t know that, huh?), One Direction and so on. You get the picture. Lesson: Learn to like it.

Insider tip: Thankfully, she also loves Elton John, Bob Dylan, Marley, the Beatles, the Stones, Eric Clapton, various 80s musicians and is learning to love Chet Baker and Louis Armstrong. She’s happy with listening to radio playing the (sigh) “oldie” hits of the 70s and 80s and even likes audio books instead of a constant Top 20 drone. We’re currently working on appreciation of Steppenwolf and Elvis Costello.

3. She wants to wear what she wants to wear. Last summer, we visited Target on our way home from vacation and with her outright blasé attitude, she assisted us, while sighing with exhaustion, in buying her some (pretty fantastic) new clothes for school. Secretly chuffed, I was thrilled that the new trends included patterned jeans, funky dresses, and hippie-style tops. Uh huh. I was excited. So excited that I should have realized my impending doom. Day two of high school and Georgia comes home, declaring firmly (again, in true Daenerys Targaryen style) that she was only wearing black tights and t-shirts from then on. And I scoffed at this, dismissed it, with a tinkly laugh and a devil-may-care, “Sure, okay!”. The next morning however, Georgia opened her eyes, and before she moved a single muscle, locked me in her gaze, proclaiming “I am wearing black tights and a t-shirt”. I knew I had my work cut out for me, but gave up early in the game. Thank goodness for Old Navy online shopping. Three clicks later, I had four pairs of black tights being shipped (“rushed”) to the door and a selection of graphic t-shirts that we can both love (i.e., everything from neon giraffes wearing glasses to classic Joy Division).

In the last few years, we’ve gone through the same single-minded dressing obsessions of Georgia’s including: wearing only men’s suits and ties (“But mommy I HAVE to wear a suit to school!!”), dresses (short-lived but well enjoyed by yours truly), white shirts (short-lived because I can’t do laundry that quickly) and heavy fleece hoodies at the height of summer (“But I need a sweater, I’m so so so cold, mommy!”). If I’ve learned anything, it that it is better to pick your battles and let her be as independent as possible where she can. I’ve also learned that it could always be worse – let’s just say that black tights and cool t-shirts aren’t the scariest choices for dressing that adolescent girls these days are choosing. Lesson: Give the kid credit; she’s knows her own style (and she’s got an admittedly great sense of style).

Insider tip: She would, if not closely monitored, wear a Piggly Wiggly t-shirt and Blue Jays hat every single day of her life. 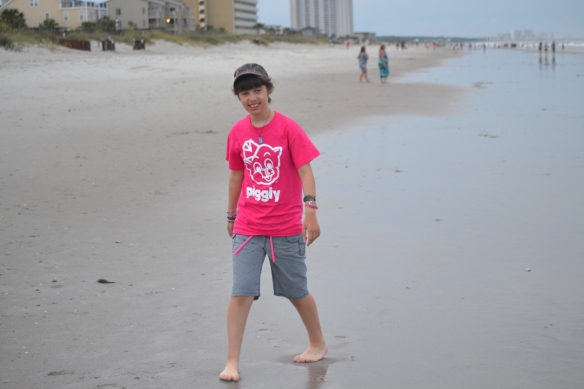 4. She eats in a way that reflects a creature made up of half yearling bear and half aging supermodel. Some days, I simply cannot provide her with enough food. She’ll demand a sandwich when walking in the door from school and midway through it, ask for dinner. She absolutely always accepts seconds when offered and demands additional helpings of salad and any warm carb on offer. When we order sushi, she can eat enough for at least two people. And then be very sad that it’s “all gone”. Other days, however, she’ll pick at the teeniest tiniest serving of something, declaring that she hates it and that she can’t possibly eat it. She’ll put her hand to her stomach, thrash about in her chair a bit, declare that she has some terrible illness and push her plate away, fanning the offensive food that dares to mock her. She’ll then roll her head around dramatically to rest it on the wall in sheer exhaustion, closing her eyes at the injustice of being told to eat food. Lesson: Ham. She can’t refuse ham.

Insider tip: Ummm. If you can’t get her to eat something, add ham.

5. She multitasks music. She is happiest when on a road trip with her parents (in the backseat) listening to her iPod, with the car radio blaring music and her iPad in her lap with the DJ app in play. Each device is playing a different song (and one must always be “Hey Jude” apparently) and that is the way her everyday living mashup works.

Insider tip: For the roadtrip, add a bag of potato chips at her side, an open photo book beside her, highway construction that she can watch and a destination with a swimming pool, and she just might burst open with sheer bliss.

I don’t know much about 15 year-olds in a general sense, but I’ve felt the inevitable sense of frustration, and witnessed the tired smiles and sighs of other parents of 15 year-olds, that I know some of this is a shared experience. While I some days feel like our 15 year-old challenges are far different from most, I take some real comfort in the fact that like most parents, I’m constantly trying to readjust, find a balance between what Georgia wants and what she might need. I’m trying to keep her safe while letting her go a bit, choosing my battles (okay, okay, I’m perhaps more slow at learning that…), giving up the fights that are just silly and letting her be as autonomous as possible with the things that matter most to her. I’m also slowly realizing that the reason she’s so Mother of Dragons about so many things is because, well, she’s learned a lot of that from me. I can be fiercely unmoving and wildly overprotective with little latitude when it comes to Georgia. But I can change, and I can relinquish my too-firm position in many of the battles, knowing I’ll have to do this more and more. Case in point: I’m ordering four more pairs of black tights for back to school, one size bigger this year – and not a single dress.