People ask me this sometimes. At first glance, it seems like an innocuous question. It’s tough to answer though – particularly right now. I need a good metaphor, I realize.

People love metaphors. They love them because metaphors help us to understand something we perhaps haven’t experienced or can’t experience. Metaphors help us make sense of things that are foreign to us and they act as tools for us to explain ourselves to others. We use metaphors to get to the bottom of mysteries and to be creative and compelling in describing something to others. Sometimes metaphors are just every day ways of communicating. The nurse who asks the patient whether his chest pain feels “sharp as a knife” or “like an elephant sitting on your chest” is trying to help decide whether to offer the patient a sedative or move him into a cardiac care unit. The runner who “hits the wall” doesn’t need to say much more to those who are avidly listening to her retell the story of her first marathon.

We are at the beach, on our annual summer vacation. When I’m on vacation here, I tend to think about all things Georgia more. I have much more free time to reflect and ponder and, well, worry. I’m around strangers much of the time in the pool or at the beach and often need to explain her to others. I’m hyper-aware of the way she is watched by other often littler kids who are curious about the lovely, funny awkward person who acts younger than them but is bigger than they are, who dances on the beach with a complete lack of self-consciousness and who laughs uproariously and with abandon every time someone jumps in the pool. The other day a family of three small kids and a mom were in the pool with us, watching Georgia out of the corners of their eyes and smiling politely at me. Georgia, as always, was the one to break the ice, asking each of them their names over and over and then repeating the names over and over – “You’re Grace, Grace, Grace-y! Hey Grrrrrace!!” The youngest boy asked me quietly, “Does Georgia have some kind of a problem?” and I did my short, friendly well-rehearsed public service announcement type of response and asked him if any kids in his class have autism. No, he replied, but he knew a kid once with cerebral palsy. I smiled. The mother asked me how old Georgia was. When I told her 15, she looked at her, then back at me and said, “Well she’s very functional!” I smiled. I wondered if, while I wasn’t paying attention, the conversation had somehow turned from adolescents to appliances.

People are kind and accepting of Georgia, and in a shared pool, strangers are forced to engage with her in a way that may test their own sense of comfort or patience. I realize that and am grateful for their efforts and their kindness.

But I also get tired. Of explaining it. Of smiling. Of answering well-intentioned but completely out-in-left-field questions.

The best one this year came up in a casual conversation with a stranger dad at the pool about the occasional small alligator you find in the waterways here. His crazy hyper, unruly (“golly, they only sleep three hours a night!”) six-year-old boys were screaming about how much fun it would be to see an alligator and his next out-of-the-blue question to me was “So would you have to hold your daughter back from just wanting to get into the water with one?” Uh, no sir, nope, I would not. I chuckled to myself that rather than an explanation of autism, he might instead need a gentle re-introduction to his own kids (not from me) who I easily pictured hurtling down to the water to scoop up their new pet alligator (“Dad, we’re calling him Norman!!!”) about a million times faster than Georgia would even consider getting off her chair to peer with adolescent disinterest into the water from afar. That’s what Georgia is like.

What is life with Georgia like? This is what I’ve been pondering here, on vacation this year. People have asked me “what it’s like” to raise a child – and now a teenager – with autism. The first thing I’d say is that if raising a child with autism is like running a marathon, then raising a teenager with autism is like running an ultra-endurance Ironman – with no training – in extreme heat and humidity – and wearing high heels.

It’s not ‘two steps forward and one back’. It’s more like one step forward and two steps back, then a crooked skip forwards a bit followed by a dramatic trip on the crack in the sidewalk and some funky dance moves sideways.

Is it like a ‘wonderful journey’? Uh, well, I suspect no mother of an adolescent would describe the experience that way exactly. No, it’s not. It’s more like a just slightly too long and too rainy family car trip in an old station wagon with no AC. You know the kind. It’s a ton of work (mostly by mom) to just get out the driveway, and by day three, dad is chain smoking behind dark glasses while driving way too fast past gift shops and trading posts, and mom is furiously knitting and angrily snapping her gum. In the back seat, the kids have drawn an imaginary line down the middle of the back seat and anytime a sliver of leg, a jostled elbow or an unattended Barbie or GI Joe crosses the line, complete chaos ensues, only abated by a threatening growl thrust backwards from the driver. The tent is ripped and leaks every time it rains, the sleeping bags are damp, someone has thrown up at least once (both in the car and in the tent) and the dog in the very back has a bad case of gas and howls anytime anyone opens a window.

But there are other moments. The fresh, quiet dewy mornings spent sitting in a folding chair with coffee and tea and no plans other than to get to the bottom of the cup. Afternoons that stretch into early evenings spent diving off a dock into a sparkling lake. Wearing a bathing suit as clothing. The moment a too-burned marshmallow falls off the stick into the friendly campfire and everyone laughs. Pulling into the driveway with a sigh, and feeling like you’ve just had the best time ever.

One metaphor that keeps coming in my head is ‘banging my head against a wall’. Being Georgia’s mom sometimes, yes, makes me feel like I’m simply banging my head against a wall. I get the same kind of results when I try or I don’t try lately, and my normally good-natured optimism is being tested, almost daily. There are days when merely approaching Georgia causes her to proclaim, “I’m very unhappy with you!” I joke about it to my friends and family (in an attempt to minimize how difficult I find it) but her level of adolescent unhappiness is extremely difficult for me to manage. Or rather, my reaction to her level of adolescent unhappiness is difficult for me to manage. She doesn’t have enough insight into her own reactions and feelings for her to understand that “hey mommy has feelings too!” and the truth is that much of the time five minutes after she proclaims her abject unhappiness, she is dancing and singing a Bob Marley song and appears to be as happy (as they say) ‘as a clam’. 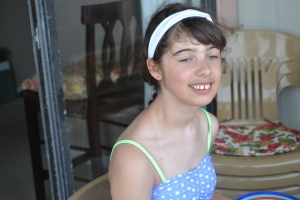 Banging one’s head against a wall isn’t exactly the right metaphor for what this is like. There is nothing positive about banging your head against a wall, no moments of satisfaction or happiness. Nothing other than that singular mostly negative experience, which can be strangely therapeutic in its blunt simplicity. That’s not life with Georgia, although it may well perfectly describe moments with Georgia.

So today I finally came up with a metaphor for life with Georgia. I came up with it while strolling along the beach, as I do most days while we are here on vacation.

I love the ocean. I also fear it just a little and understand it far less than I’d like to.

Every day I’m here at the beach, I’m astounded at how the ocean is so consistently unvaried and almost exhausting in its sameness from year to year and day to day, while also being so very different in each passing minute or hour. At high tide, the ocean is all bravado and white caps – angry, threatening, strong. At low tide the landscape is dappled by gentle tidal pools where toddlers crouch beside and dabble fingers in the water that has been warmed by the sun. Depending on the moon, the wind, and the sky, the ocean changes colour, intensity, temperature. Some days, the ocean is clear, calm and blue and you can paddle in peacefully, in salty aqua stillness. On other days, it’s murky, frothy, dark green and tumultuous – hitting you from behind with an unexpected forceful crest as you wade out of its grasp. While beautiful and compelling, the ocean holds mysteries and potentials that are intriguing and frightening.

Like the ocean, life with Georgia is staggeringly repetitive and beautifully invariable, wave after inevitable wave breaking upon the shoreline. Predictable yet formidable. Tempting yet fearsome. At one moment, joyfully inviting and the next moment, tumultuous and forceful. It’s not to be trifled with: one hidden rip current below the calm surface and you’re caught up in it in an instant, flailing madly and trying to remember what you were told to do. It’s useless in a rip current to try to swim hard against it but if you do nothing, it will carry you far from where you want to be, beyond the breaking waves on the shoreline and out of sight of everyone else. You need to focus, realize you’re caught in a rip current, then stop panicking and find strength. Don’t try to fight the current, everyone says, swim parallel to the shore. Trying to swim directly against the flow of water will exhaust you. Take the life preserver if it is tossed to you and let yourself be pulled out of the current, usually just a mere few feet to one side.

I’m a good swimmer. I’ve become a better swimmer, as I’ve gotten older, spending more time at the ocean and becoming more athletic now than when I was younger. I sense that, as Georgia gets older and increasingly complicated, I’m going to be spending more and more time caught in those rip currents that underscore life with her and less and less time dabbling idly in placid tidal pools. I’ll just try to keep my head above water, swim parallel to the shore, and see where it takes us.

"Introducing Georgia" (This is the best place to start.)